The Lost Tribes of Leicestershire: The Mods By Mark Charlton 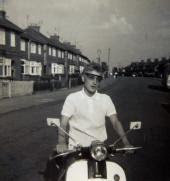 “I guess it had a lot to do with Irish Clothing and the Il Rondo, and there was also a pub called the Antelope. “I think it just drew us to the area as there were places we could meet.”

Leicester was buzzing with these hip, rebellious kids who wanted to make their mark on the world by dressing smartly and listening to the hottest new sounds. It was their way of getting noticed and making a point to their elders.

John says: “In the 50s and early 60s, young people were almost penned in, everything was dictated to them. “When Mod came along, it was our way of saying ‘we are human beings’. We were trying to put over our feelings that we weren’t going to put up with being told what to do.”

The Mod scene, with its slick fashion and fascination with black American soul music, had spread north from London, fed by newspapers reporting on violent clashes between Mods and Rockers in Brighton and Margate in 1964, and by on Radio Caroline. Young people in Leicester were quick to pick up on the idea. John says: “The first Mods were in Leicester by 1964. It was sweeping the country at that time. “I was still at school and started getting into the music and the fashions. I knew I wanted to be a Mod.

“When I turned 16 I bought my scooter. At that time, I had a good job in engineering. I needed it. Being a Mod was expensive. You had to keep up with all the latest fashions, for a start.

“Then you had to run your scooter, keeping it taxed and on the road before buying all the accessories to make it look as good as possible.

“Then there was the music. You had to keep up with all the new music coming out, plus the wild life that went with it and on top of all that you had to try to keep a girl on your arm.

“I earned good money in engineering, but I didn’t save a penny.”

Another young Mod was Chris Busby, from the West End of Leicester. He recalls choosing to be a Mod when he was still at school.

Chris remembers Leicester was a great place to be at that time.

“There was so much going on,” he says. “The music was fantastic, there were some great places to go and lots of house parties.”

Chris was part of a Leicester Mod band called CERT X. Other notable Mod acts from the city’s scene were The Cissy and Legay.
John saw them perform at several gigs in the 60s. He says: “CERT X was a really good local band, really good.”
The highlight of the band’s career was supporting Cream at Nottingham University.
The music scene was vibrant at that time.
Chris remembers: “A place called the Night Owl opened, in Newarke Street, in 1966, which put on all-nighters. I think (soul singer) Geno Washington recorded an album there.
“Bands like Amen Corner also appeared there. There were a lot of people taking drugs like blues and dexys, and I think that is why it got shut down quite quickly. “The Green Bowler, in Churchgate, was popular too.”

Leicester in the mid 60s was already something of a cultural melting pot. Lots of young black kids were mixing with white lads at nightclubs and gigs.

Chris says: “It was a good time. We were friends with a lot of the black lads, there was never any trouble between us – we all respected one another. The only time we ever had aggro was with the rockers.”

The Mods’ cats-v-dogs relationship with the rockers is well documented. Seaside skirmishes at Brighton and Margate and made national news but there was plenty of trouble in Leicester, too. John says: “The rockers used to hang out down at the Roman Cafe, in Humberstone Road. It was part of the life of a Mod to have problems with the rockers, or Hell’s Angels.
“They were so different from us. We would roll up at the Roman Cafe on our scooters just so we could have a scrap. They would come looking for us, too.”

Chris remembers one incident: “We were at the Casino Ballroom at the top of London Road.
“A popular boxer, Alex Barrow, was there, a black guy, with two of his friends. Two rockers walked in, and one of the lads with Alex said ‘you hit my mate’ and knocked one of them flying. Within 30 minutes, hundreds of rockers were flying down London Road on their motorbikes heading for the club.”

There was an unwritten hierarchy within the Mods. If you were particularly cool, you were a ‘face’. If you could not keep up with the pace of the scene, you were seen as a ‘ticket’.

Chris says: “The older lads, who were about two or three years older, were working and could afford better clothing. We looked up to them, they were the faces to us.
“There wasn’t a rank as such, but we were subconsciously aware the differences were there. We knew the older ones to nod at, there was never any problem between us.”
John says: “There was a lad called Tony Weston. He was king of the Mods to us. “He was the organiser, our leader, always coming up with ideas and things to do. We all looked up to him because of the way he dressed and his scooter.” John had a Vespa 125cc GL scooter. “Registration 461 BBC,” he says.
“I’ll never forget it. It had all the gear – spotlamps, a big aerial at the back, a slimline windscreen and so many mirrors it was a wonder it moved, it was so weighed down.
“I had so many spotlamps that if I turned on the lights without the engine running it would flatten the battery.”
“But keeping your scooter up to scratch was a big part of it. It cost a bloody fortune.
“The main place for buying scooters at that time was a place called Readers, in Aylestone. We all went there.”
“Scooters were appealing at the time because you could do hundreds of miles on a tank of petrol. “A group of us went to Yarmouth. It took us the best part of six hours to get there. It was a steady run and we only used a tank-and-a-half of petrol there and back.”

Chris had a Lambretta li 150 with green and white stripped side panels and fur on the seats. “It cost me £30 in 1966 and wasn’t anything special compared to some of the scooters around but it was special to me,” he says. “It would be worth £2,000 if I still had it.”

Chris also did his fair share of going to Mod events at coastal resorts, even taking a job in Skegness. But there was plenty going on in Leicester. Wednesday at Il Rhondo, in Silver Street, was Mod night, on Sunday, Mod music was played at The Palais de Danse, in Humberstone Gate, and the Casino Ballroom, in London Road, held regular live events. Music was the lifeblood of the scene. All-night dances, or parties were often fuelled by the use of amphetamine-based drugs. Some were known as blues, or purple hearts.
John says: “People were taking them because, if you didn’t there was no way you would last the amount of time you were awake for.
“The main thing was the music,” says Chris. “It was so new and fresh.”
John says: “There were certain songs that were important to us, for example the Sir Douglas Quintet’s She’s About a Mover and Louie Louie, by the Kingsmen.”

The fashion and hair styles still have a huge influence today. Chris has been a barber for 36 years and now has a shop, in Northampton Street. But when he needed a Mod cut back in the 60s, there was only one place to go. “Everybody went to Ron’s, in Church Gate. It is still there. “At the time, there was a look that was something close to how Paul Weller wears his hair now.
“Another was how Roger Daltry (singer in The Who) wore his, with a parting, although some people just wanted a close-cut, clean look.” Mods felt the way they looked set them apart from the rest. Attention to detail was vital. Clothes would be made-to-measure and tight fitting. Shirts and suits would be sent to the tailor for more buttons to be added or taken away, depending on the mood. “We’d have bigger vents put in or more buttons put on our shirts, just to make them different. We were always trying to stay one step ahead,” says Chris.

Having such smart clothes proved a problem motoring around town on a scooter. A US Army fishtail parka was ideal for keeping clean on the move.
John says: “I had a parka and a mohair suit – well, several. We were always buying clothes, trying to have something new and to stay ahead of everyone else.”
Chris says: “I never really got into the suit thing. Lots of people did, though. On a Saturday, there was Jackson’s the Tailors, in Gallowtree Gate, and Burton’s, in Church Gate, which would have queues outside all day from the moment they opened, with people collecting clothes they had ordered, or being measured up for something.
“Jackson’s was seen as a cut above the others because the staff would offer advice to the customers.
“Personally, I preferred wearing Levi Jeans, desert boots and a Ben Sherman shirt rather than a suit. I wanted to feel comfortable. Also jumpers with targets on, or shirts similar to those Roger Daltry was wearing at the time.
“I bought an overcoat from Irish for £22. That was four weeks wages to me. I have still got it.”

By 1967, the Mod scene was changing. Some were moving away from the slick looks and sounds and moving into psychedelic music.
“They were what we called the ‘flower children’, says John. “They were getting in to what became the hippy thing. I guess bands like The Who and Small Faces had become more psychedelic, particularly the Small Faces with their album Ogden’s Nut Gone Flake. I moved on to other things but I have never stopped feeling that I am a Mod. Even now, I’m still a Mod. I love the Mods.”

Some stuck to their cause of being a Mod and others became interested in the skinhead scene, which was emerging in the late 60s.

Chris, a married dad of three, remembers: “I was working in Skegness in 1969 and I could still see running battles between Mods and rockers. “I went on to become interested in other things, but years later I was thinking about the look and how much I enjoyed wearing the clothes, so I went back to it. “So now I wear a Ben Sherman, Levi jeans and desert boots. I love it, and the music, of course.”

In 1979, The Who brought out the movie Quadrophenia. It told the story of the Mods, their clashes with rockers, the girls, the drugs, the parties. The film was to coincide with and widen the impact of a Mod revival, which had started in London a few months earlier.
Chris said it was very true to life. “It’s pretty close,” he says. “Particularly a scene in Brighton as Jimmy (Phil Daniels) walks along the seafront with all the other Mods. “Somebody asks him what the best thing about being a Mod is. He says something like ‘being here, amongst all this’. And it was spot on.
“That buzz, the buzz of being part of it at that time, that is exactly how being a Mod felt.”