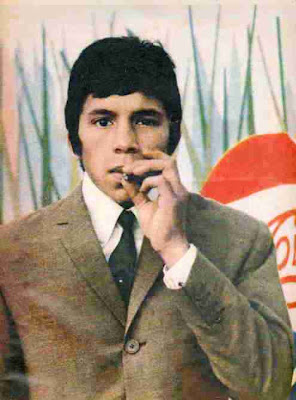 CHANGING FACES
They have been called the « anti-hoorays ».

« But you can tell us by the way we walk – feet out », said one Mod.
« Rockers are hunched. We hope to stay smart for ever, not shoddy like our parents. » 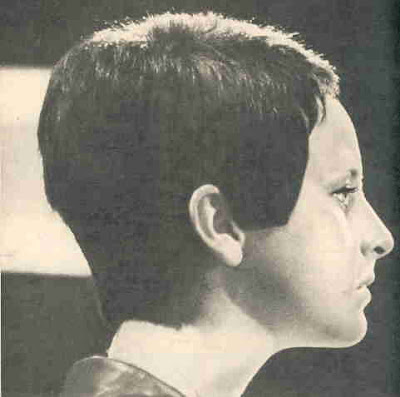 « Next year it will be dead. Fellows of 15 and 16 are giving it a bad name : It’s these scooter Mods who live and die in their anoraks. They go down to the coast, hang around and then, there’s trouble. » the speaker is Jack, 18, who works on a building site. 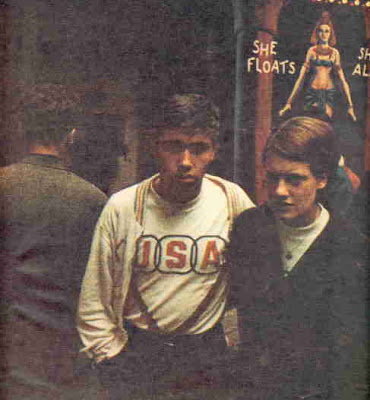 « Once you’ve got to 20 you consider yourself a bit old-mannish. If you’re a bit juvenile, you can get away with it. But you know yourselfyou’re getting on, you’re going to be left out of things. » Denzil (above) livesin Streatham where his father is a garage mechanic.

He says things used to be lively in Streatham « till the kids started going up to the West End and getting introduced to the pills, getting edgy and argumentative. There’s a lot of lying when you get ‘blocked’ – the number of girls you get in a week, the price of your suit. But the drug kick is dying out a bit. » 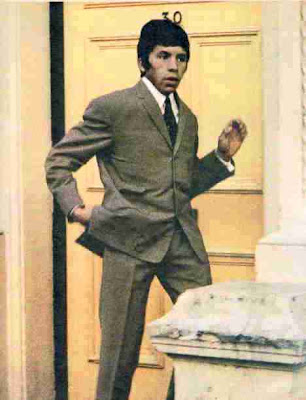 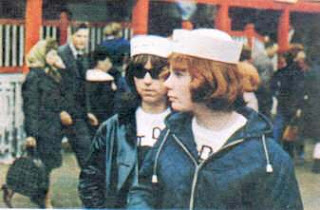 « Most of these real beaty girls are only looking to boys for companionship. They’re sexually dumb. » says Eric Burdon (one of the Animals). A boy may like a girl he meets at the Scene club in Soho. But she comes from Hounslow and he comes from Purley so the make their own way home.
Most Mods live with their families –« I don’t tell my parents I go up to the West End, » said one girl. « I mean, would you let your daughter do it ? » « Not very many go steady these days, » says Ted, who is a ‘leader’.

« That’s mostly Rockers. There’s nothing else for them to do, no dancing. Very few girls are worth taking out more than once. » Denzil says « The fellow’s got to like a girl a lot to have her around with his friends. Of course you get the all-night parties. Jumping around to a gramophone. Then all of sudden you get tired, and go to sleep. » 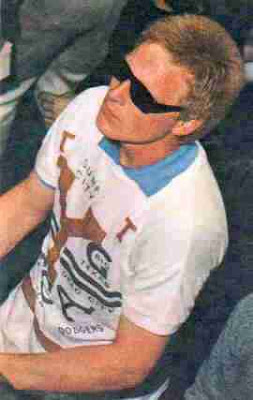 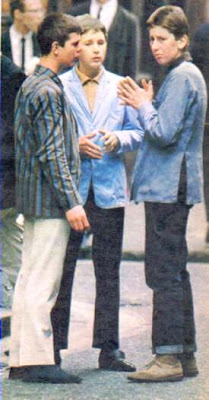 « American styles are out, like Madras cotton jackets and Seven and Sixes – that’s the name we give to baby Mods who’re still wearing these 7s 6d. T Shirts from Woolworths. » Denzil says it’s suits now, and basket shoes.
You need £ 15 a week to be a leader – most Mods make between £ 8 and £ 10 a week and spend about £ 4 on clothes. « It’s pure dress now, » says a ‘stylist’, « no gimmicks. Your handbag has to look expensive inside, it could never be plastic. » « A boy will carry trousers to the dance hall in a polythene bag so they don’t get creased, » says another. « They spend hours on their hair – they don’t use any old blow drier, but one with a hood. » 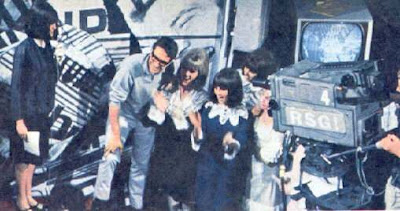 « The Shake, Block, Bang, Surf – they’re all out. And girls are out for dancing. They don’t let themselves go. So we just dance as a group. » For Mods the pop music and dance TV programme is still Ready Steady Go ; and the club is The Scene. Cathy who comperes the show, says the programme is successful because it doesn’t preach. « We show the kids what’s new – they can pick it up if they like it. » Everybody goes to The Scene (2 gns. A year membership, 1 gn. for girls) because they’ve had groups like The Animals and The Stones and put on rare records from America. 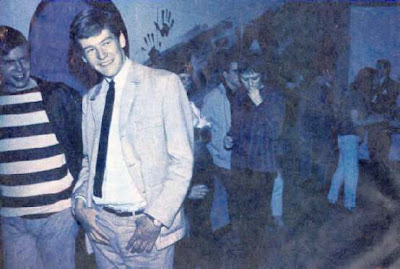 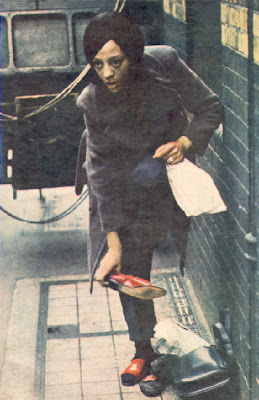 « If you can’t dance you might as well go home. Or you have to dress really smart to make up for it. » Quick changes, like this one outside a Soho club are part of the game. Tuesday is the best night at The Scene. Monday is Mecca night (Hammersmith Palais or the Orchard at Purley), Wednesday for staying in, Thursday for washing your hair – and Friday for nothing special ? Then Saturday night-all night in the West End. « Movies or football ? » says Denzil. « We don’t have time for them, because Sunday’s meant for the Flamingo, or sleeping, and Saturday for shopping. » 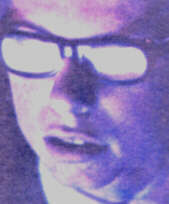 « There’s a place for choice Mods left of the band. Rockers wouldn’t dare stand there. » The choice place is at the Orchard Ballroom – which has two bars, ultra-violet lights that play on the dancers, and a blue grotto for sitting out. It costs 3s. to get in -–if you get past the ‘bouncers’ ; they know the trouble-makers.
The ‘choice’ Mods don’t use the term ‘Mod’. « You wouldn’t be pleased to call yourself that, » says Denzil. « Though you might call us stylists, orfaces. » « New faces are being snubbed now, » says Louise, « because the old ones are still in power. By the time it’s the young kids’ turn, something else will be in. »

I don’t really mind about keeping up with the Joneses but when your friends look at you and say, ‘We’ve got a car or a fridge … » Jean (Below) who works as a hairdresser is 19. Her husband Mike is 22. He’s a post office engineer. They live in a small flat in Hammersmith, and collect stones, knives and cheap antiques. Both are Mods but they look forward to staying at home at least one night a week. Mike wears carpet slippers after work. Both of them are saving up for things. Most Mods are more worried about having a good time than a good job. 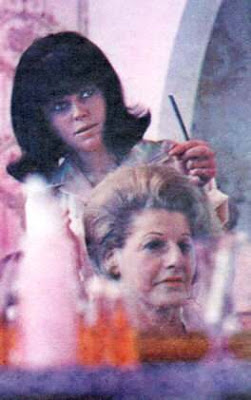 Say you get something unusual like going to the coast in a lorry, you look forward to it. »
Or a shuffle boat party on the Thames, or sitting around on the beach at Margate with your transistor. « Everybody wants to go abroad, » says Denzil. « Some get ‘blocked’ and say they’ve been washed up in Switzerland or Casablanca. But you know it’s not true. » « Some boys put up pylons in the summer – you get a good tan that way, » says Louise.
A few years ago, when the coffee bars were in, you pretended you were intellectual. Now you just chatter. « We don’t talk politics or religion – we hate attempts to make religion with it. It’s always Rockers on those tele programmes. » 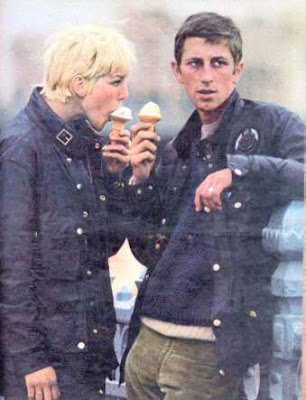 « This Violence is stirred up by the papers. The Mods haven’t time to hate – they are too busy looking at themselves. » The two ‘Mockers’ above wear Rocker-type jackets but made of nylon, not leather ; and Mod hair styles. They don’t fit either side. « But the press built up these gangs, » says Ted. « We’d just walk past the Rockers. » But now, according to one girl, somebody says, ‘Let’s go to Hastings, or Brighton, for violence’. » « My dad’s trying to get me to join the Young Conservatives » says Louise, « but I like this set. They’re nice, and they say what they mean. »
Posted by Jack That Cat Was Clean at 10:59

I like the look of the "mockers" eating icecreams.