1st Fontana session (1964). Pete Meaden decides to write songs. Persuades Who to change name to High Numbers. Thought Who was a "tacky, gimmicky name." Meaden gets unreleased R&B records from Scene Club d.j. Guy Stevens, steals music, writes his own lyrics. Pete learns to be a "relay" of the Mod scene; picking up new trends and dance moves from his vantage point on stage, then copying the best and getting the credit. High Numbers live mostly cover "growling R&B songs. Guitar feedback absent on High Numbers' record. Pete plays "weedy" jazz guitar on "Zoot Suit" showing how far he still had to go. Record did not break, selling "about 400 copies." Meaden misses the innovation in the band's sound. Mods, however, do get it finding The Who's "effeminate" Mod clothing combined with their aggressive sound an example of "the cult of the elegant, disciplined, well-to-do, sharply-dressed and sexually indeterminate and dangerously androgynous yobbo."

In replies Pete adds that Roger's older sister and her boyfriend were, in 1962, the only Mods he knew. Roger still dressed like Elvis. Older homosexuals were attracted to the young, well-dressed Mod boys while lesbians were attracted to the short-haired Mod girls. Pete also found the Mod girl look "extremely erotic." When an analyst suggested it was because they looked like boys, Pete dismissed the answer as "a little too obvious." His father's generation got the same thrill getting women out of their masculine army uniforms. By late 1964 Mod spread throughout London and the famous Mod-Rocker battles started. Some Mod boys went with Who manager Kit Lambert to Paris, tried out gay sex and came back more experienced in the world.

Pete and Nick's ex-girlfriend spend a weekend traveling around Brighton in late summer 1964; sleep together "platonically", did speed, shared a compartment on the milk train back to London. Basis for romantic images in Quadrophenia.
High Numbers fail audition at Decca. Would have passed if they had original material. Kit and Chris encourage Pete to come up with songs. Pete listens over and over to The Freewheelin' Bob Dylan and You Better Get It In Your Soul by Charlie Mingus. Searches for words about how the music made him feel but found "I can't explain." The phrase forms the basis of his second song. Records demo on "clunky old domestic tape recorder". Barney [Richard Barnes] compares it to Dylan with a hint of Mose Allison. Kit and Chris make contact with Kinks' producer Shel Talmy. Pete reconstructs song around "You Really Got Me" and changes words about music to love. Play tape for Shel at 2 'I's Club in Soho. Pete already wrote title "Anyway Anyhow Anywhere" on a piece of paper about listening to Charlie Parker. "I Can't Explain" recorded at Pye. Jimmy Page brought in as second guitar. Shel brings in replacement drummer; Keith tells him to 'scarper.' Shel brings in background singers to replace demo's harmonies ruined by Keith joining in. Shel gets good commercial sound. Page's "laughably weedy" guitar on the B-side cause Pete to not take him seriously for years. 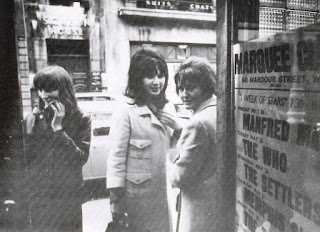 October 1964 - Kit and Chris gets Tuesday residency for band at Marquee Club in Soho. Took Who logo with arrow from Pete's notebooks. He adapted it from older Detours logo. Aubrey Dewar takes solo picture of Pete windmilling. Pete thinks he looks unattractive in photo. Graphic designer from Ealing makes the "Maximum R&B" poster. Central London covered with posters. Had out membership cards to "The 100 Faces" with free entry to club. No women got the card. Attendance 90% male. Pete looked forward to shows "beyond all measure." Pete then designing 'Pop Art' target t-shirts in his notebooks. R&B songs perfect medium for guitar feedback. Press begins to notice. Sexy blonde dances in front of group during all-nighter at Club Noreik. Sends letter to Pete; Pete brings her to flat, goes with her to Marquee date. Worries Mods will find her clothing uncool. Leaving her at bar while performing causes paranoid panic attack. Same thing happens at another show. Cannot deal with it and leaves without her. Feels "trapped" on stage, fearful partner will betray him during performance. Echo of mother's affair while father away performing.

In reply to my question, Pete says he was not on speed during the Marquee run, so it was not the source of any paranoia. Says he still feels "trapped" on stage today.
Posted by Jack That Cat Was Clean at 16:55